Preconstruction. After working with Hess Bros. for several months in an effort to expand and renovate their existing facility, the apple distributor realized it was not feasible to meet their growing needs at their current location. They then tasked Warfel with finding suitable site on which to build a new facility. Our development team spent about 6 months vetting properties, and with the help of our Virtual Design and Construction team, ‘built’ models of buildings on the sites (similar to the illustration at right) to determine feasibility of their building program and site requirements at each location. With no exact site matches, Warfel proposed to Hess Bros. that they consider purchasing an existing facility that could accommodate their program needs. Warfel had studied the former Delmarva Millwork Plant on Manheim Pike and determined that it could in fact work for Hess Bros. The challenge, however, was to figure out how to modify it so that all of their specialty needs would be met. Distributing a billion apples a year entails some pretty specific equipment and space programming!

As a design/build project, Warfel was responsible to secure the architect. Warfel created the RFP, interivewed potential team members, and, ultimately selected Althouse Martin to join the project team based on their past experiences. Initially our efforts were concentrated on studying their operation and how to create efficiencies in layout. Ultimately we offered several building layout scenarios and costs associated with them, enabling Hess Bros. to select the option(s) that provided the most value for their dollar, while achieving all of their immediate programming needs. For example, cold storage was a huge aspect of this project. Three large units were needed, but after examining costs, it was determined to be more cost effective to extend the height of the cold storage units to the roof, and re-engineer the roof to increase its R-value. Although this created the need for structural roof modifications, in the long run it was a much better value than installing conventional sized cold storage units which would have doubled the required sprinkler piping (above and below the cold storage unit ceiling.) To help offset the cost of several other needed design modifications, our team submitted a value management package to Hess Bros. with various options and dates by which that needed to make a decision in order to accommodate the changes before or during construction. Additionally, our team spent many hours researching the equipment and packaging lines to be installed (ordered directly by Hess Bros. from Italy), and, after consultations and on-site pre-installation meetings with the suppliers, presented the recommended MEP requirements and floor load support for proper installation.

Demolition and Preparation for Construction. Standing empty for several years, the millwork facility was actually in fair condition, just well worn and extremely dusty and dirty inside due to the type of work performed there for years. Our first task was to literally clean the building from top to bottom leaving a clean slate from which to start. This also enabled the team to visually inspect all structural elements to ensure the structural integrity of the building before beginning any work. Once cleared for construction, we then began interior demolition, tearing out virtually all of the interior elements, walls, ceilings, and the entire mechanical, electrical and plumbing systems, leaving basically a lonely building shell. To illustrate the amount of work needed to perform the demolition and ready the building for the actual ‘work’, this aspect of the schedule took approximately 6 full weeks, nearly a quarter of the entire schedule. An interesting area of the facility was the existing mezzanine level. The design of the packing line was such that we were able to redesign and reuse this space for the two-tiered crating system. With added stairways and structural modifications to handle the weight of the equipment, the mezzanine is the best place to from which to gain a bird’s eye view of the entire operation.

Complexities. MEP work was critical on this project and managing the complicated system replacements, as well as the installation and modifications to accommodate the massive cold storage/refrigeration units, was key to maintaining the schedule. Preconstruction coordination meetings and on-site pre-installation meetings with each trade ensured proper collaboration and coordination of these MEP trades. During construction, it was imperative that the trades be coordinated properly and manpower be evaluated weekly to ensure prompt completion of each task. To assure a smooth process, our superintendent scheduled 75% complete inspections with the proper authorities so that we would catch any unforeseen issues before the time crunch of final inspections. Proper planning and execution of the roof modifications were also key to the success of this project. As designed, the roof was not capable to hold the weight of the rooftop units and refrigeration equipment. Additional bar joists and structural steel modifications had to be made to support the new elements. A measure twice, cut once attitude helped ensure complete accuracy for cuts and newly installed beams and bracing. Once all structural modifications were complete, a complete new EPDM roofing system as installed which included 80% of the existing deteriorated metal deck. In addition to roof structural modifications, most windows throughout the facility were removed and replace  to bring in more natural lighting. This consisted of removing the old translucent panels and fabricating custom windows to fit in the existing openings. In the cold storage areas, the translucent panels were removed and insulated refrigeration panels were
used to infill these areas.

Owner Equipment Coordination. Although it was not in Warfel’s scope of work to purchase the multi-million dollar production lines and other specialty equipment, we did help coordinate delivery and researched these systems so the installation would be completed properly. Being manufactured in Europe, there was a degree of difficulty with communication. To help facilitate the process, and to ensure we were on the right track with our installation prep work, we worked closely with the owner, manufacturer, and installers to coordinate the electric requirements and
inspect the plant for any hindrances that could delay installation. To put this into perspective, the packaging lines and equipment Hess Bros. had purchased is so advanced, that experts in this industry were shocked to see this being installed in a facility in this area. 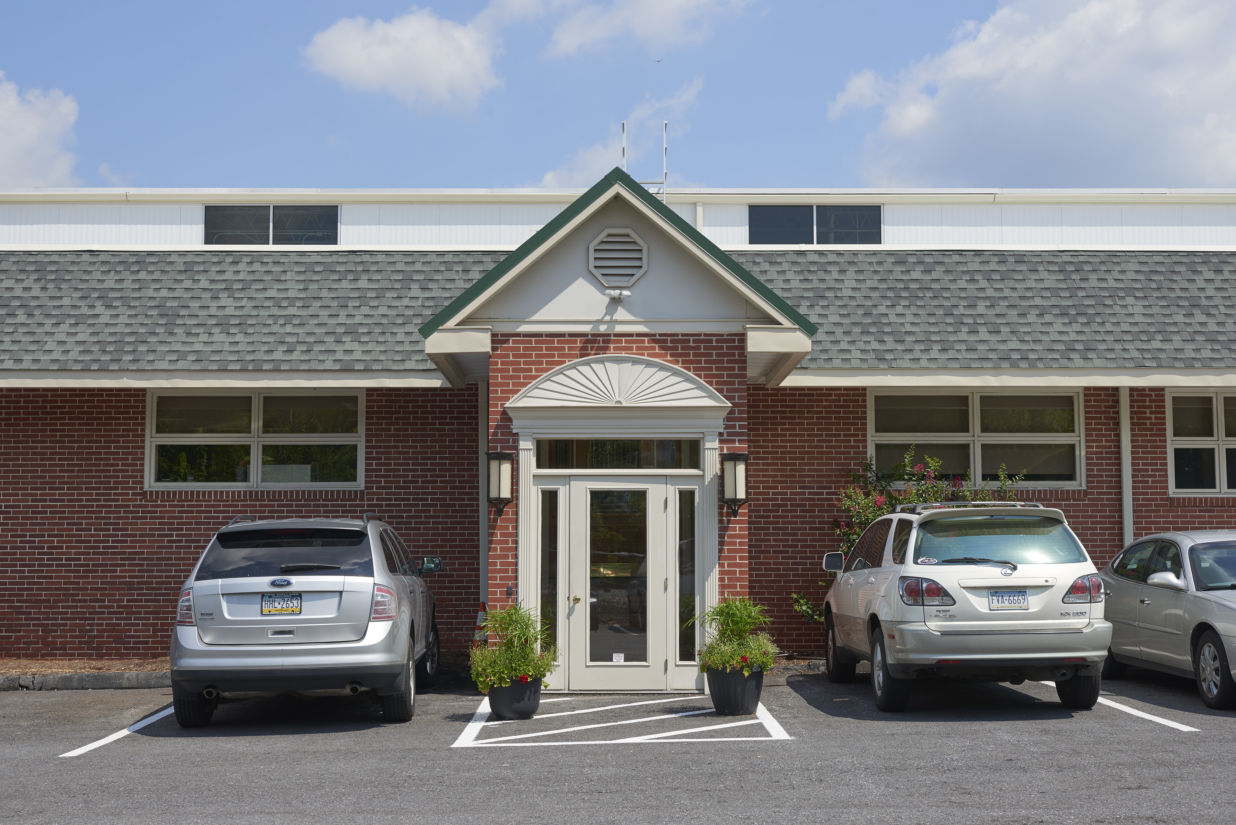 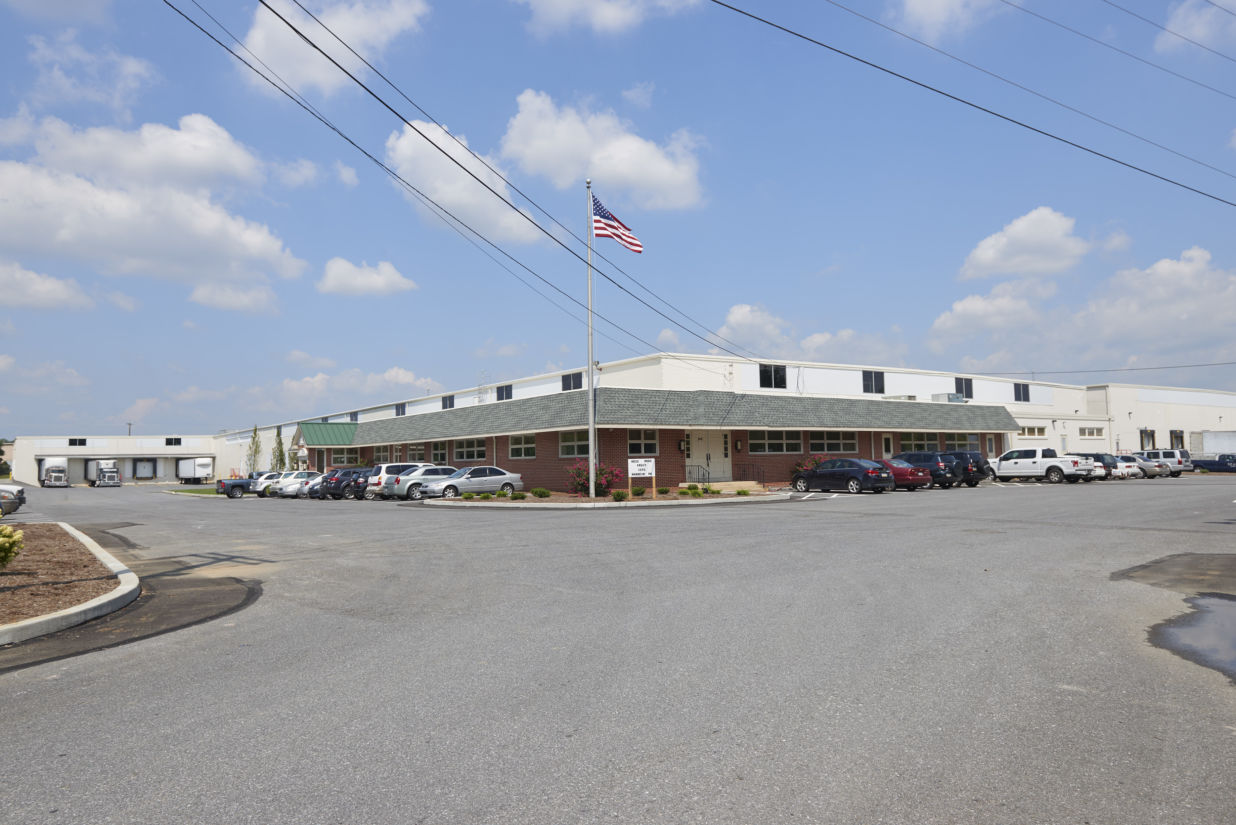 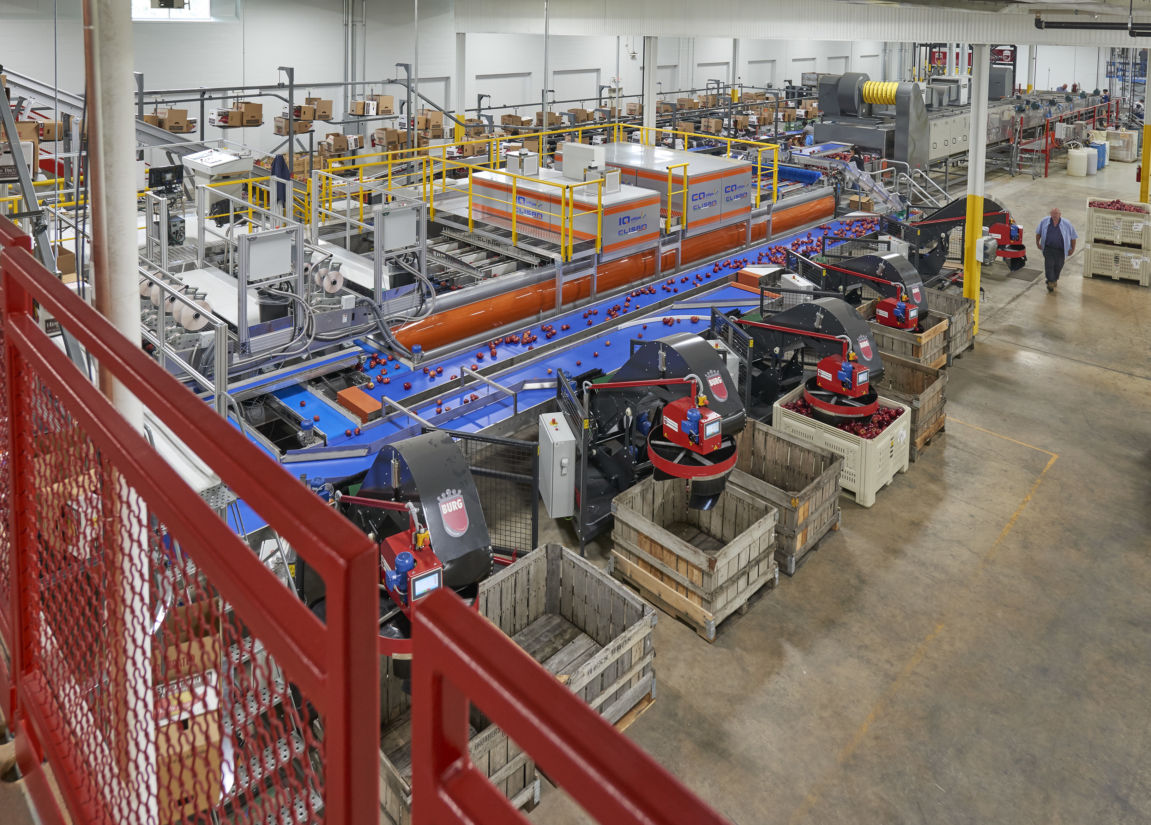 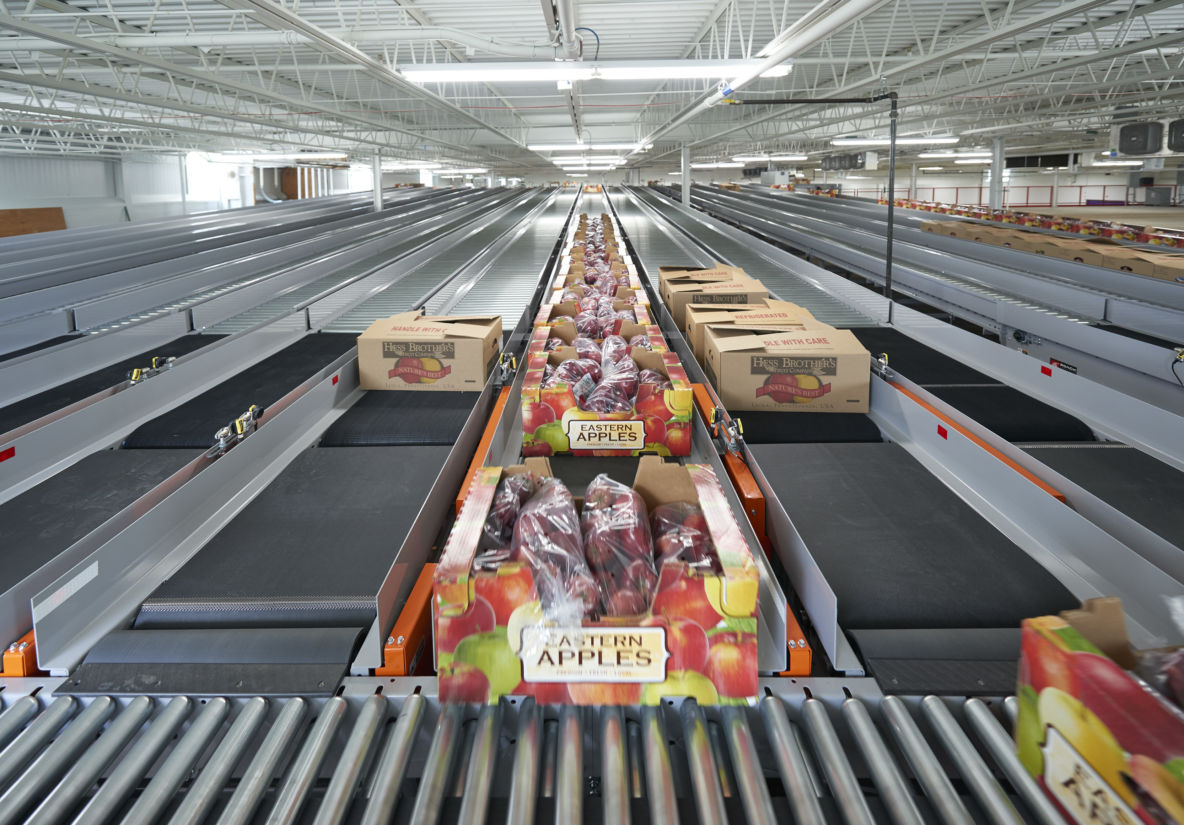 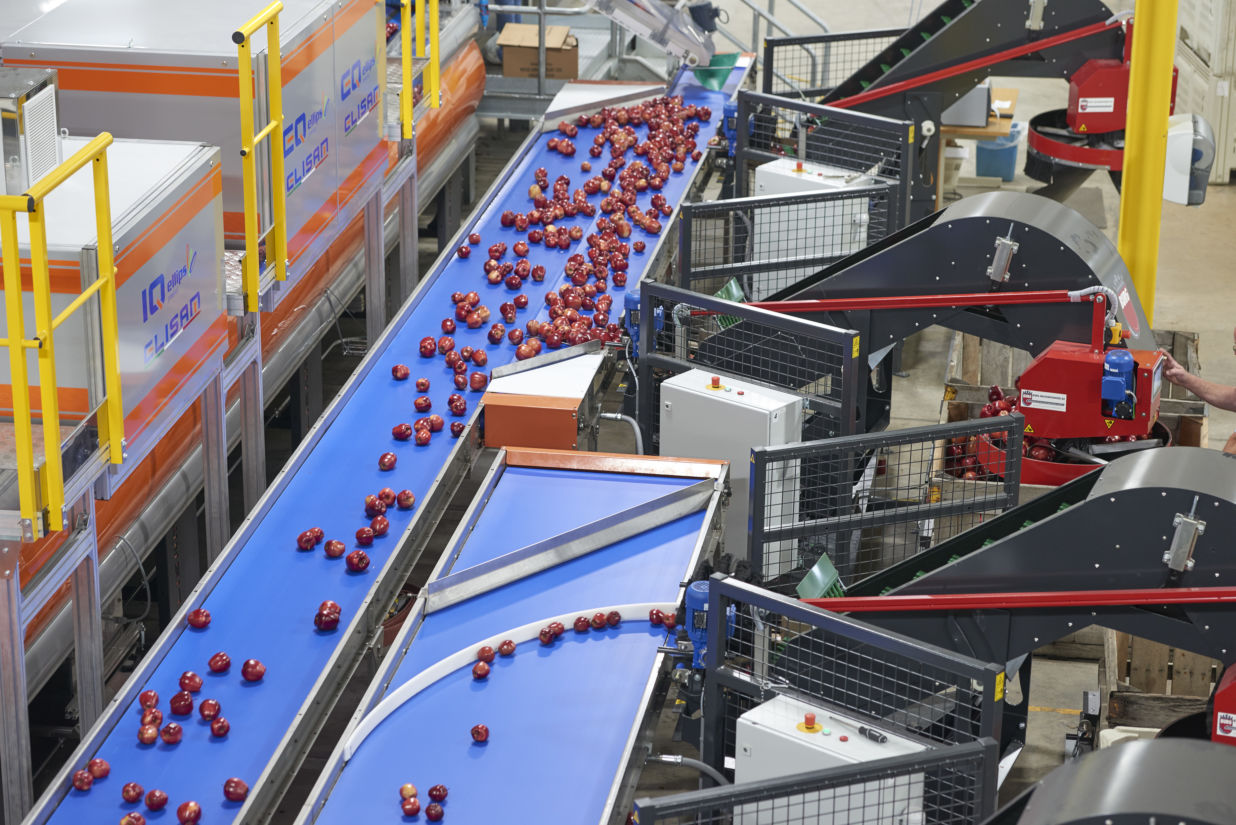 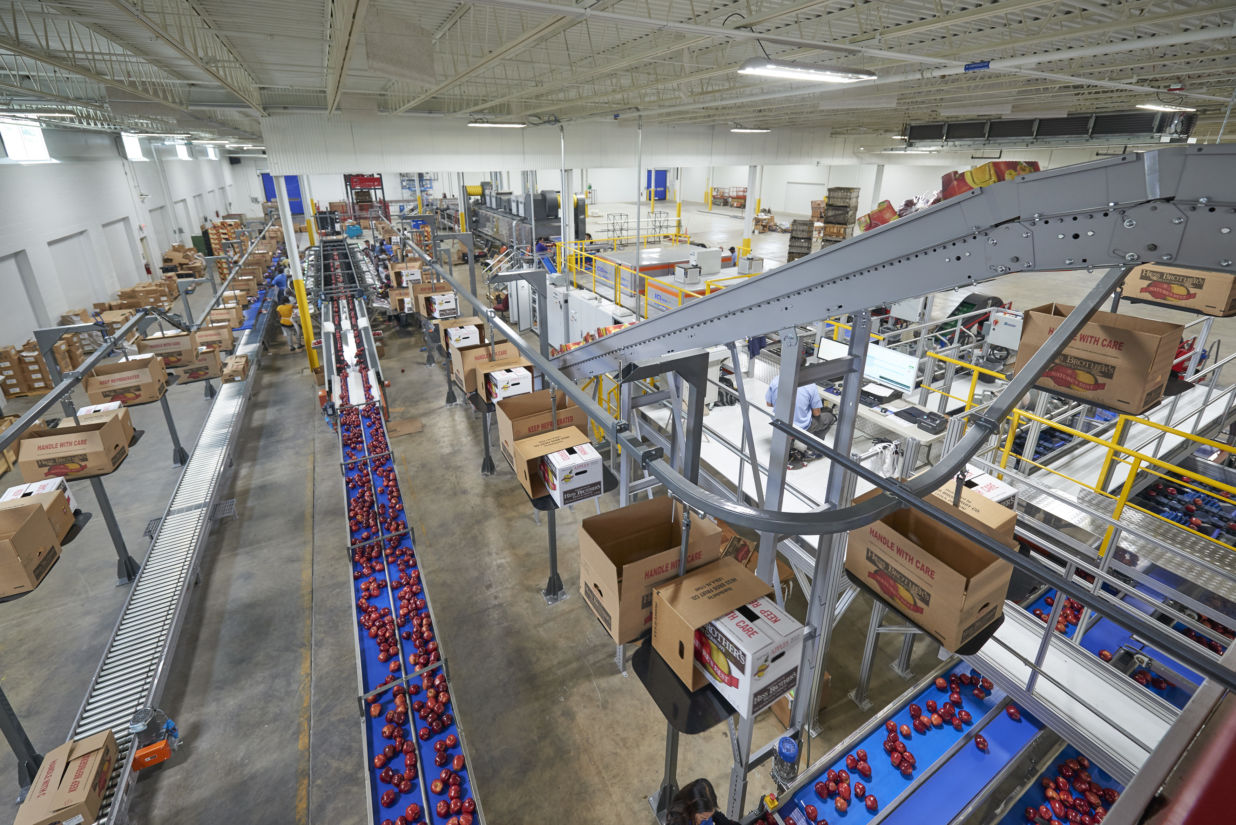