Early Involvement. Engaged in 2014 to help Lancaster Catholic navigate its master plan, Warfel provided consulting, feasibility and estimating services and guidance to the board and building committee with regard to municipal requirements and the construction process as a whole. The stadium project was originally conceived as part of the master plan simply as a new turf field and upgraded lighting. However, when Warfel initiated a structural study that revealed the bleachers would fully deteriorate within 5 years, it was determined to increase the scope of the project.

After a year or two of planning and fundraising (as part of the larger master plan), the turf replacement effort resulted in a much larger vision. Warfel helped the school hone in on the final plan to completely demolish and reconstruct the entire complex, rotating the football field 180 degrees to a north/south orientation as is today’s norm to keep the sun away from players’ sightlines.

Warfel was integral throughout the entire project development process, providing the project team with information to help them make educated decisions that framed the final project scope of the work. Additionally, Warfel worked closely with the team from Derck & Edson to help Lancaster Catholic salvage the fairly newly installed tennis courts by devising various site alternates for consideration, which ultimately led to the new entrance being located on the opposite side of the field. While slightly more inconvenient access-wise, it saved hundreds of thousands in costs for new tennis courts.

Municipal Coordination. A unique situation, this site actually lies within two municipalities. The sewer and storm-water management was through the City of Lancaster, while the road access (due to rotating the stadium and creating a new entrance) was within the jurisdiction of Manheim Township. For a primarily ‘site-work’ heavy project, it required a great deal of administration to ensure proper coordination with authorities. As project representative, a member of the Warfel team attending meetings of both planning commissions for several years leading up to the project.

Schedule Challenges. From the date of Groundbreaking on February 15, 2017, we encountered numerous challenges to keeping this fast-track project on schedule for a September 1st completion. Lancaster Catholic was already advertising the first home football game, and we certainly didn’t want to disappoint the students, nor the many, many parents and alumni that made significant contributions to the project. Additionally, because the field turf and track were to be completed by national firms (they schedule over 600 of these per year and are in very high demand in summer months), our schedule could not fluctuate by one day, as both of these companies had no flexibility for our project. We had been on their schedules for nearly a year already. LCHS was one of many on their summer schedule, and they could not sacrifice work on others to accommodate this project. Talk about pressure!

Unsuitable Soil. During excavation of the existing field, track and surrounding common areas, we encountered extreme amounts of unsuitable soil throughout the site. Although testing had been completed, the areas were so random that it could not have been detected without numerous testings. To completely remedy the situation, we had to excavate and reconstruct nearly 100,000 cubic tons of soil. We then needed to import 2A or 2B stone and roll for compaction. Our Superintendent had the City of Lancaster on call for inspection when ready so we could continue moving forward as soon as it was completed. This unplanned activity added nearly two weeks to the schedule, but with great cooperation from our excavating team in adding weekend and 12-hours days, we were able to get back to the original schedule.

Sink Holes. Throughout the course of the project, 9 sink holes of substantial size developed. Each time we thought we’d seen the last one, until the next one popped up. In each of these nine times, we need to bring in stone and concrete to fill, and then have the testing agency confirm integrity. Our superintendent had to be on his toes at all times to maintain immediate contact with authorities to ensure timely inspections and to keep job progress moving.

Extreme Wet Weather. This relatively short schedule encountered 40 rain-day events during the first 2 and a half months! In combination with the above two factors, this could have ultimately caused the demise of this project had the proper contingency plans and planning not happened throughout the preconstruction process. By having nearly every day specifically laid out on the schedule, it was much easier to determine what critical items could be resequenced or separated into mini-projects by means of longer hours and weekends. Again, with the incredible lines of communication established by our PM and Super and cooperation from all parties, we were able to devise ways to get extra work done on the dry days and piece out work in the wet weather. Needless to say, everyone had two weather apps on their phones throughout this project!

Despite the schedule difficulties, Lancaster Catholic was able to hold their previously scheduled home opener on the field as planned. It was incredible to see the excitement of the students and alumni of this very close-knit school community as they celebrated this great milestone together.

Turf Preparation. Warfel and its trade partners constructed a complicated sub base in preparation for the field turf system. This base consisted of an underdrain system, perimeter trench drain, approximately 24 inches of crushed stone and a finish stone course placed with GPS data for establishing the proper contour of the field. It was imperative that the contour, which included slight
sloping to the edges for proper drainage, was executed properly, or else the turf would not lay or wear as intended.

School Environment. Although we were not working in or directly around the school, our crew had to remain vigilant in their safety and jobsite cleanliness aspects. Sports fields were in use on both sides of the work area throughout the job with Spring sports and Fall sport preparations. Additionally, the field house was in use with boys and girls sports throughout the job and the adjacent parking lot was utilized for overflow student parking. Warfel and the Lancaster Catholic team had numerous meetings to discuss expectations and the best approach to maintaining a safe environment around the ongoing work. All Warfel workers were required to wear orange safety vests for easy recognition. Due to the sensitive environment with students, anyone entering the work area was required to sign in and out each day. 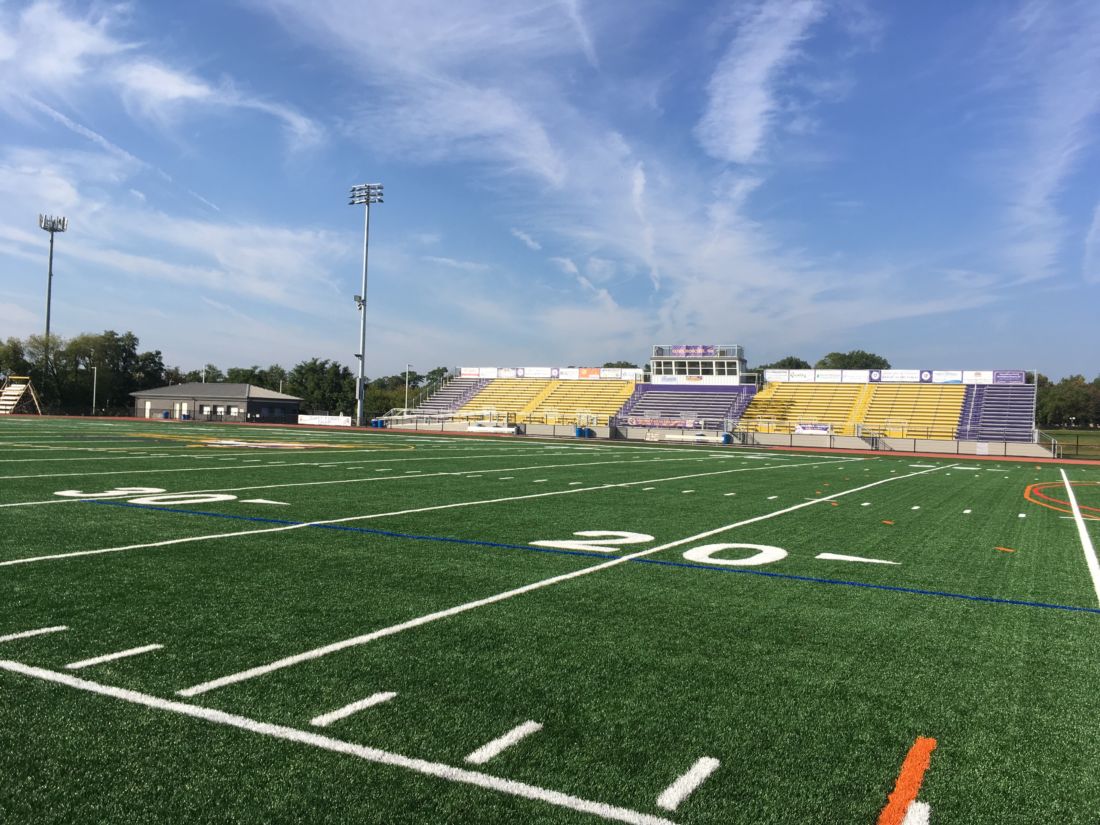 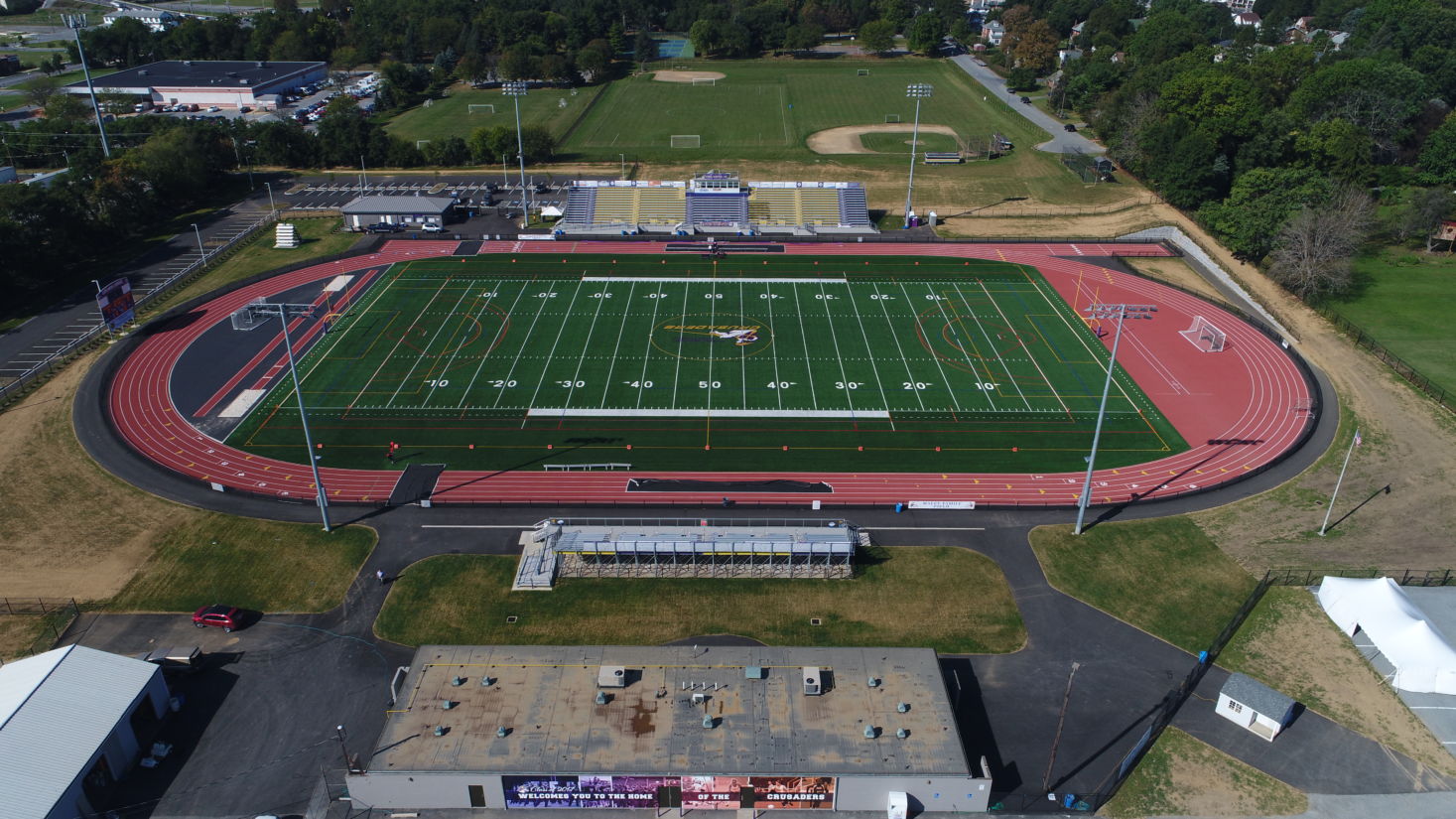 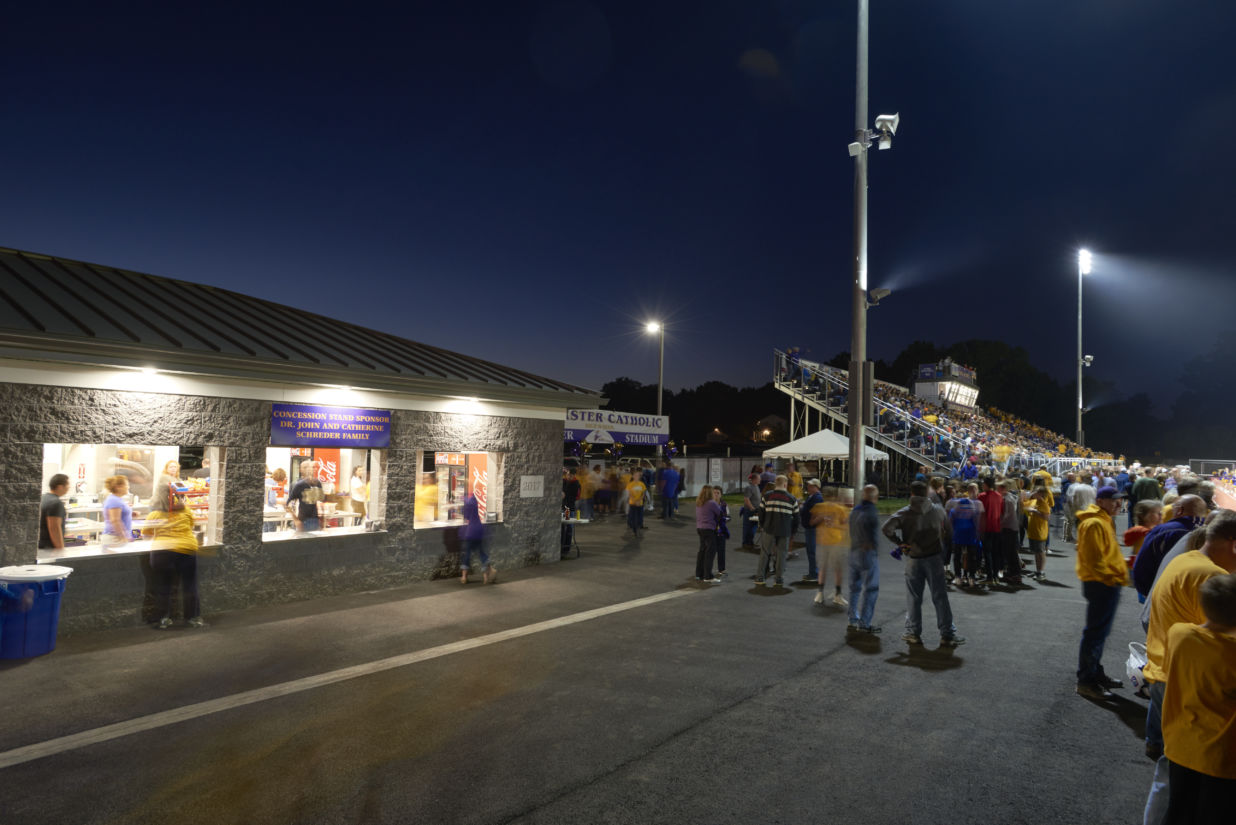 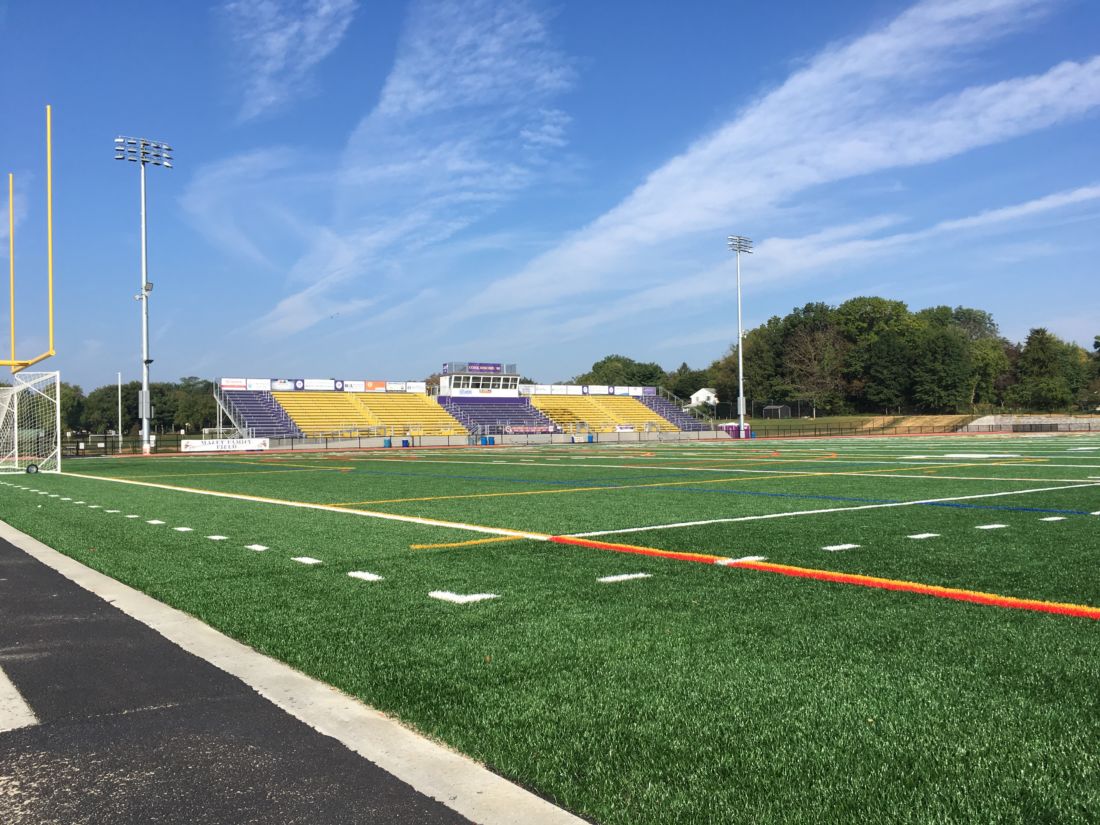