Preconstruction. Mennonite Home Communities brought Warfel on board early in the design process as construction manager. Our team collaborated with RLPS Architects with an integrated, system-oriented approach to project development, design, and construction. During the nearly 12-month preconstruction process, all elements of the VIVA Centre were scrutinized and evaluated to ensure that the owner was receiving the best value for their dollar. Warfel’s estimating and preconstruction team worked intensely with RLPS Architects to develop pricing at various stages of design so that the owner could determine the feasibility of their options. Cost detail sheets were offered at each level of pricing so that the owner could easily determine how and why the estimate was modified. This ultimately helped Mennonite Home determine the final design, and the many signature elements to be included. After our initial budget analysis, we studied all elements of the project, and offered over 90 elements of comprehensive value management and cost containment ideas that we believed were feasible, without compromising the integrity of the design.
A large part of the preconstruction process was determining how the actual work would be sequenced. Warfel prepared animated schedule scenarios created by our Virtual Design and Construction coordinator that helped Mennonite Home visualize how the work could be sequenced, allowing the facility to remain fully operational throughout the entire construction process. A project such as this can potentially cause many issues during construction, especially if not planned and coordinated properly. Challenging and impractical details that may have resulted in quality issues or long term serviceability problems were identified throughout preconstruction, along with solutions for the team to review. Ultimately, once construction began, the owner felt confident in the project at hand, knowing a detailed, comprehensive plan was established to successfully drive the project through each phase of construction, while minimizing the effects that the work would have on ongoing activities throughout the complex.

Construction Challenges. More than your normal renovation/addition, the Woodcrest Villa expansion included an addition of a new auditorium, Lobby & Prefunction space, Fitness Rooms, and a new Aquatics center. While that scope is usually not extraordinary, this addition touched four existing floors. The new additions were attached to the existing building, on all sides, and it also extended out OVER a hill that dropped 23’ vertically in less than an 80’ horizontal distance. Warfel’s scope of work included excavating this existing bank to the point where concrete foundation retaining walls could be constructed, waterproofing the walls, backfilling against the waterproofing, building the addition and finally ‘molding’ the new grades of the existing hill around the new addition, thus providing the owner with access to get small equipment up the hill to the upper level courtyards, new bocce courts, and the rooftop plaza (over the new Auditorium). While installing the new transformer and stormwater management systems, a vast array of unidentified underground utilities were discovered. The most critical was the electrical duct bank
providing power to a large portion of the campus. With the help of a utility locator, the design team, vacuum and water excavation, Warfel and the entire team were able to work around these existing utilities to ultimately install all pieces and parts of the new electrical, data, storm, sanitary and domestic water systems required for the new addition. Existing underground
utilities were not always located per the previous as-built plans. A challenging logistical portion of this project was a requirement to remove structural components of the existing building to connect the new addition. Both an existing two story wall and an existing precast plank flooring system on the interior of the building had to be removed for the new structural connections.
Some of these existing components supported the columns and floor above. While building the addition, Warfel was responsible to analyze and execute the shoring requirements before proceeding, and while this is required on similar projects, the structural engineer allowed us to proceed only one step at a time. Shoring was installed followed by a new structural addition. Shoring was then moved; more existing structure was taken out; demolition followed; and only then, new structure was added. Several rounds of this step-by-step process ensued and since, the interior renovation was adjacent to an occupied space, we had to ensure little to no water infiltration during weather events. At one point, we opened the side of the existing building, and were required to slide several pieces of precast plank through a 12’ high x 8’ wide opening, into the building, using a crane and set it at least 25’ past the opening. This was quite a tight squeeze as the top of the crane, once extended, came within inches of the existing structure. Once all the structural components were complete, it was onto the high level of finishes picked for this project by both the architect and owner. It is not a stretch to say that every room in the new project had some sort of accent to it thus making it its own unique space. One of these accents was a wood feature wall in the Prefunction space. The requirements of this wall included constructing an unnoticeable pattern with only six different size pieces of millwork and three stain variations. Using our Virtual Design team Warfel took the lead on this wall and created two plans, one showing piece size and the other showing stain color. These plans came into full effect as the carpenter who installed this accent wall was up and down a ladder more than 200 times installing and checking each individual piece. In addition to this one wall, the extensive ceiling systems, painting palette, flooring layout, millwork, casework, and terrazzo floors brought this project to life and helped put an exclamation point on the entire team’s vision!

Customer Service. We made every effort to go above and beyond the expectations of our client. If an event was scheduled at the campus, we scheduled construction around it or halted
activities if needed. Prior to construction, our team made a presentation to the residents. We explained what areas would be renovated and how the project would be phased. We discussed circulation and assured them that they would still be able to get east to west and north to south. To help communicate progress, we created a monthly newsletter to explain work being done, what they can expect to see in the upcoming weeks. We also highlighted members of the team so residents and staff could get to know a bit about the people working in their ‘home’. Additionally, we accommodated group tours for board members and residents throughout construction. 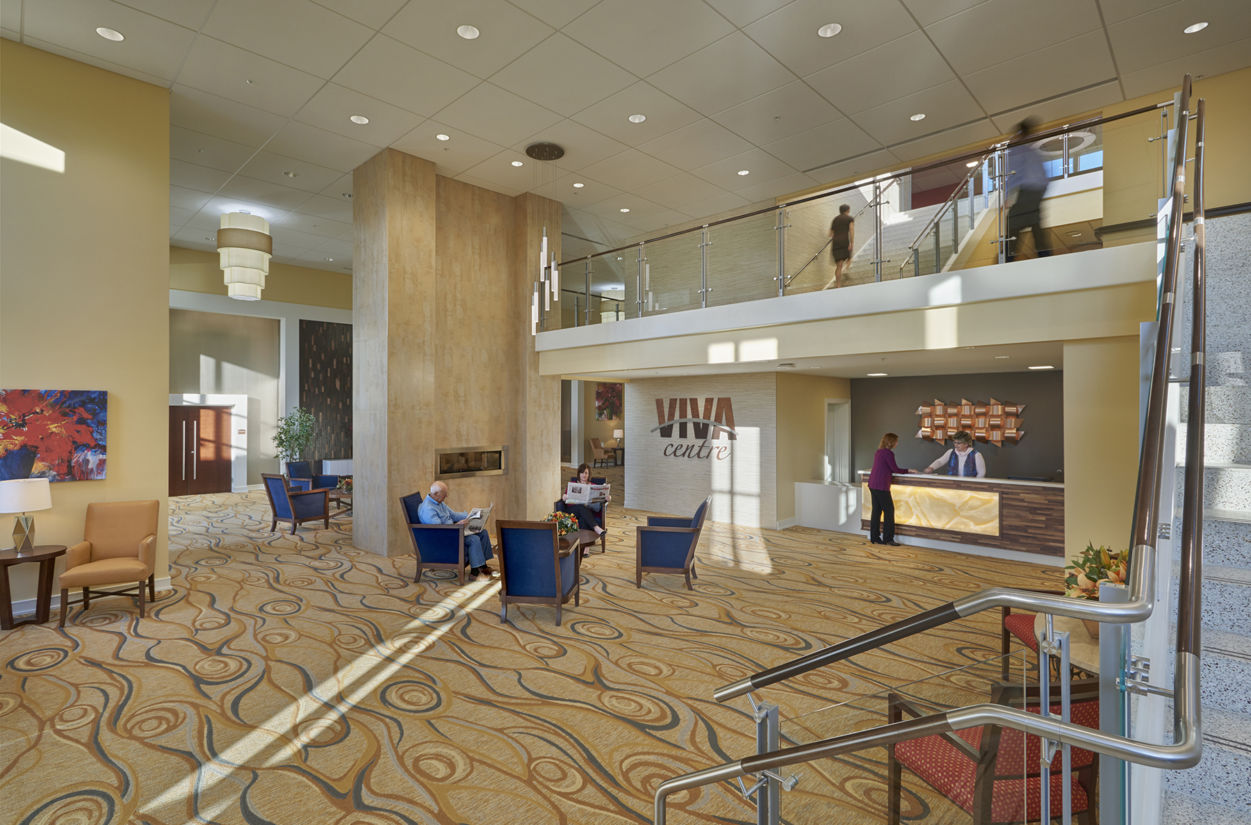 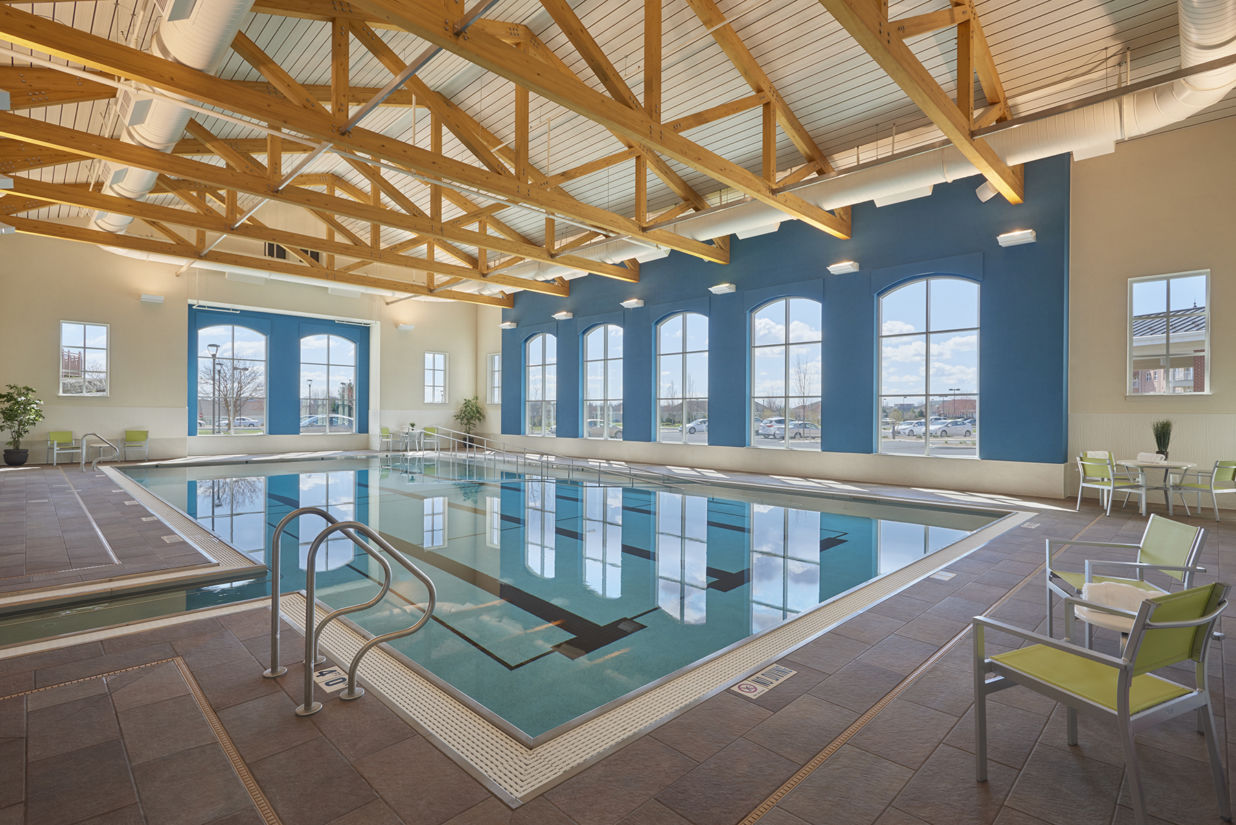 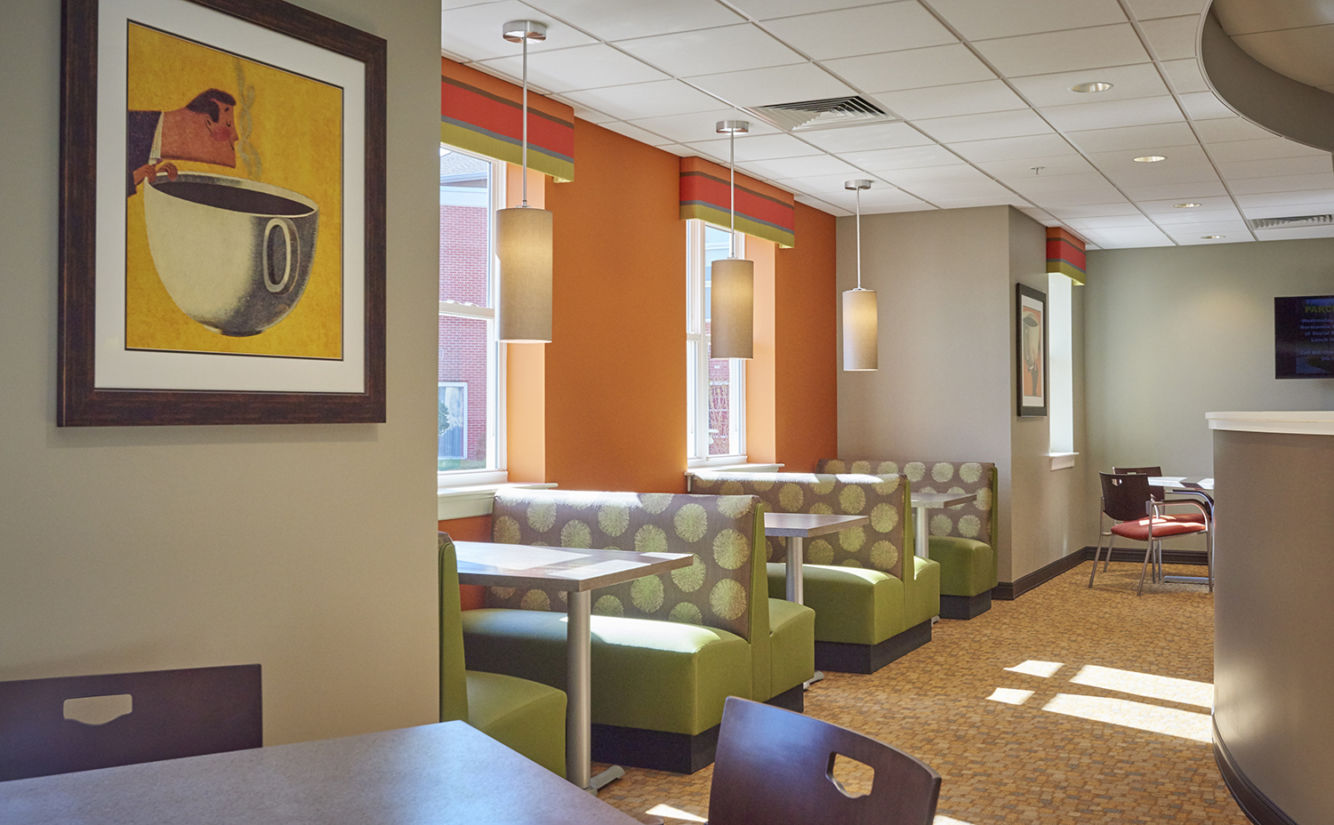 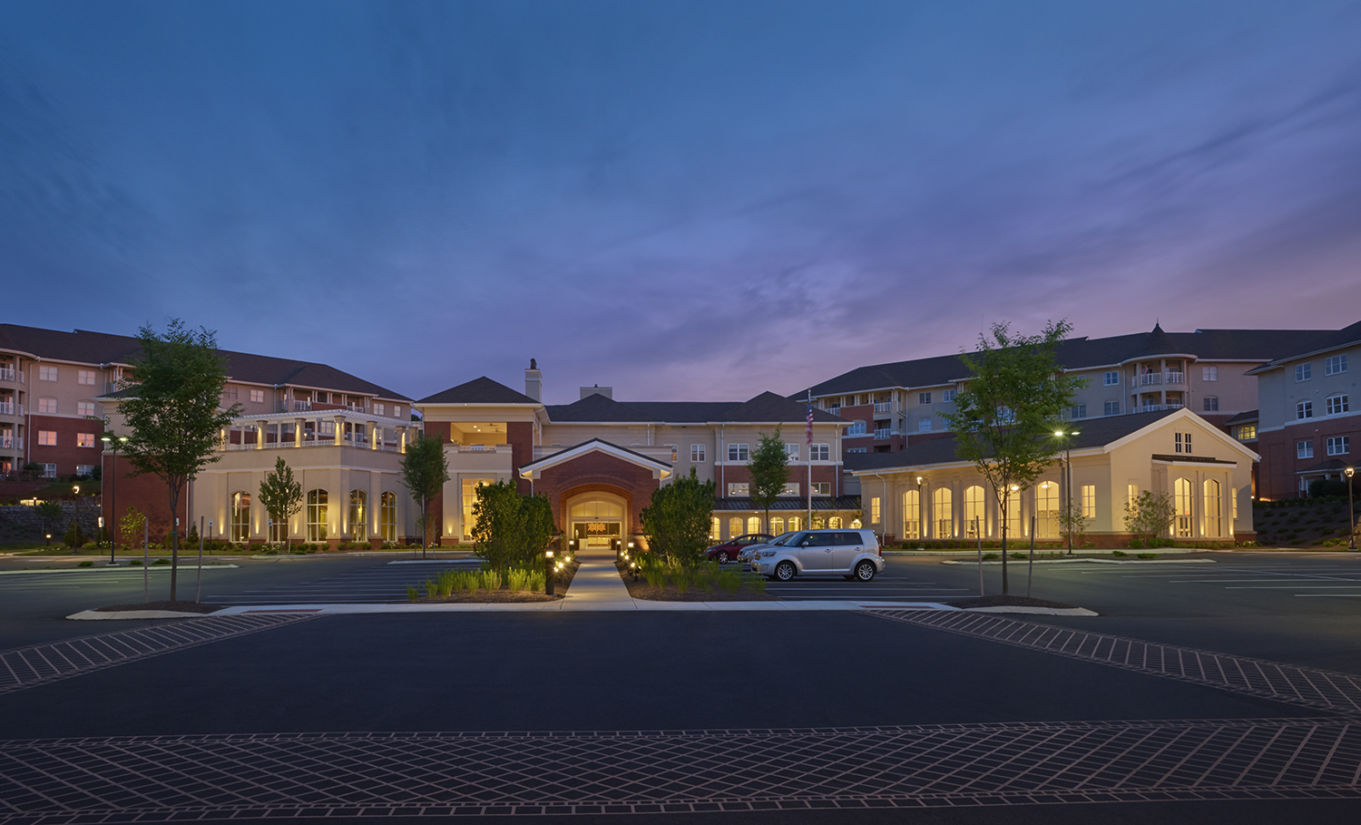 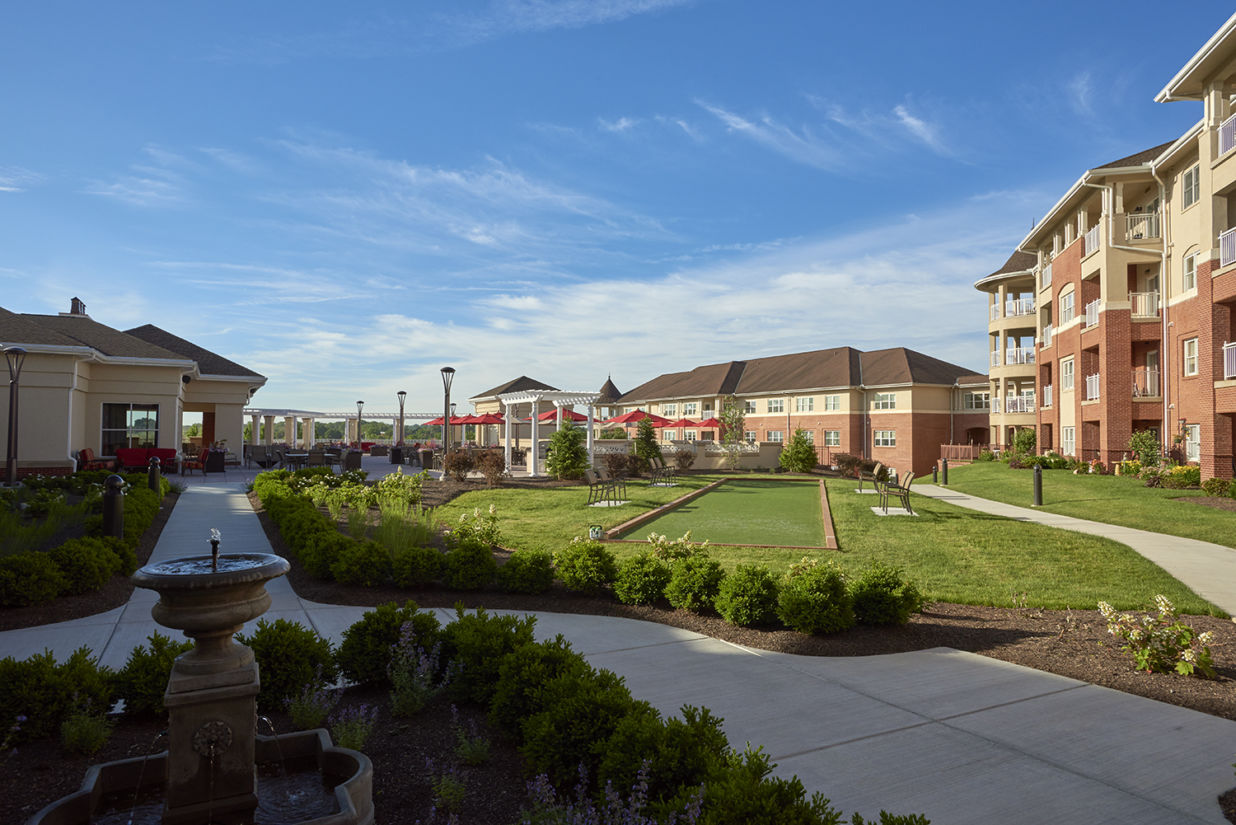